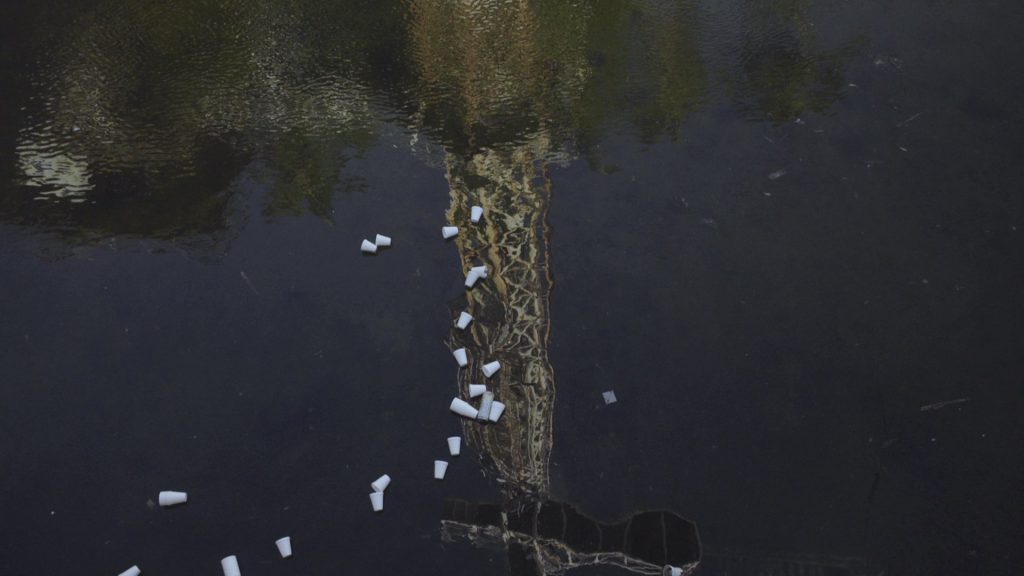 Describing itself as “somewhat of a science fiction embedded within a documentary,” The Still Side (El Lado Quieto) indeed lives up to its humble disclaimer: it’s somewhat fictional, somewhat not, somewhat contemplative, somewhat pressing, somewhat… Here, one could fill in the blank with anything, for the directors, Miko Revereza and Carolina Fusilier, seem to lose touch of the film’s sensations altogether; instead, they get swallowed by a vain desperation to aestheticize anything in view, only to be left floating face-down amid a flotsam of filmic elements bereft of meaningful connections.

An undocumented immigrant in America for 26 years, Miko Revereza embraces themes of distance, separation, and longing in his films. This time, the director really finds himself cast adrift in Mexico due to the pandemic. In a sense, the mythical creature—the viewpoint of the film, Siyokoy, is Revereza himself, who also got washed ashore far from their homeland, the Philippines—or did they choose to come here? Dense yet directional, the vigorous current seems to build up expectations of something exciting once the camera cuts through vigorous bubbles into the light. However, as promising as the idea is, reality borders banality.

One can always find refuge in the better parts of a film and justify our affection with generous sensibility. The Still Side is indeed interesting: the film ruminates on the idea of making a habitable home within destruction. However, the film lacks for me this organic sense of exploration—the meditative period only succeeds a whirlwinding storm of discomfort. This immediate and perpetual insistence on neat, beautiful cinematography not only undermines the viewers’ ability to immerse with all senses into the space, but also distracts from engaging in deeper contemplations, for curious eyes don’t wonder at perfection.

It’s almost so pretty that there’s no sense of life. Intercutting among Greek mythologies and themes of abandoned glory, lostness, and mystery, the film is momentarily saved by the slow promenades against a backdrop of the theme park’s audio guide and announcements, but is then again lost to a consecution of waterpark ruins framed in perfect symmetry, perfect to the point of affectation. These static shots create a visual conflict with the wandering POV shots of the abandoned remnants, a conflict that breaks the flow of contemplations apart. The editing is meditative, but maybe too “full.” Each image, whether belonging to a consistent themed series: paint-chipped animal murals or washed out waterslides, emptied cages or opaque aquariums, whether humming industrial ASMR or calling out the single dead leaf, precedes the next in what I deem as nonchalance. Can’t they be slightly hollow, since this is somewhat a science-fiction film? Yes and no. I have an abundance of patience for slow cinema, only when it’s loud and solid, in intention. All these extended shots of semi-working debris and natural residents (snails, fox, fish, ants,…) fail to capture the lifeblood still throbbing in such desolation simply because they are not honest—what we see is more the viewpoint of a controlled robot than of a Siyokoy, even less of a sensorial man. And I’m sure the main character is anything but a robot.

The spatial study along this quest for philosophical meditations is further muddled and diluted by the discussions between the two offscreen artists. Although sounding intimate in their whispery tones, the content of their talks is sterile, superimposed on visuals that are also sterile. Looking at the beautiful sun that resonates weakly with the rest of the film while listening to a high-school-lunchtime-type discussion about power and empire, I realize I’ve already understood all there is to understand. There seems to be a story about the resurrecting power of death calling for some remorseful resolution in response to post-industrialist decay interwoven in images of life (or the lack of), naturalistic recordings of ambience (lifeless or alive), but it is lost, or forgotten, in the gaps here and there between the filmmakers’ attempt to micromanage and their compounding a joke about a novel shape-shifting technology for future inhabitants, like those customizable emojis on social media, that is hardly funny. How can this bring about the lightness of meditation after such an arid and controlled presentation? After reaching the end of the preach, what more (of this future, or of this film) is there for the audience to conceive?

There are plenty of interesting elements and decisions attempted in the film, but merely nothing holds them together. Separately, they shine in glamour, but each glamour cancels another out. Intentional but loose, beautiful but barren, this is somewhat of a documentary that adopts a faux identity of a science-fiction in hope of redeeming its dreariness.