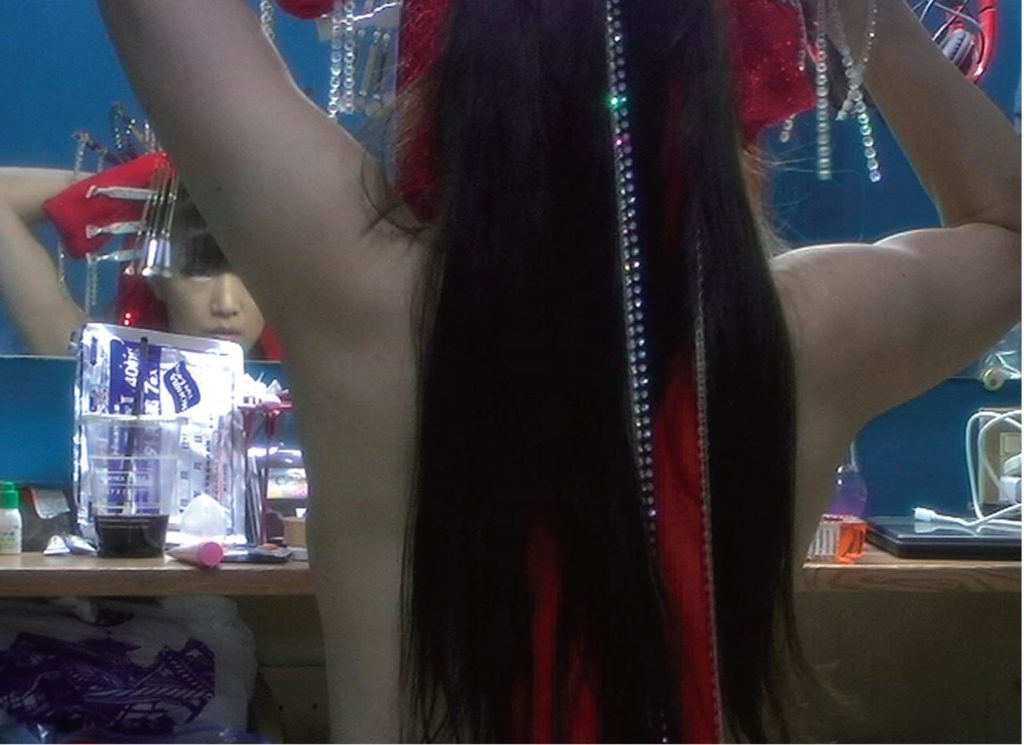 To put it succinctly, Nude at Heart is a eulogy to a dying Japanese art. Okutani Yoichiro documents the behind-the-curtain lives of multiple odoriko (Japanese for dancing girl) traveling around the last 20 remaining Japanese strip theaters. Odoriko are theater performers that center their performances around stripping. The audience aren’t allowed to touch them, nor are the odoriko allowed to have sexual relationships with them. The audience are mostly older men. The young don’t really go to these strip theaters anymore because they have been rendered almost obsolete amidst newer forms of entertainment.

It’s easy for someone coming in at the documentary to assume that Nude at Heart would feature victims of the sex industry. But it’s a surprise to realize that it highlights dignified women lamenting over the future of their respected theatrical stripping. Older odoriko complain about the changing tradition from sensuality to physicality. Younger odoriko ponder their eventual career options whenever all strip theaters close down. “It’s not prostitution,” says one of the dancers.

Emphasis should be given to “Japanese art,” because the subject matter is culturally sensitive. Of course, there are still layers of class and gender that can be extracted from the text. However, the documentary doesn’t really present them at the forefront. Maybe a Japanese sensibility is needed to fully grasp the nuance of its subject. As an outsider, how should one evaluate the politics of the subject properly in regards to the grander scheme of things in Japanese society? At least one can describe how they feel in regards to what the documentary presents.

We see several performances, but there is no nudity shot on-stage where it is

spectacularized for the audience (both those in the theatre and us watching). All the nudity is from backstage, where odoriko prepare for their respective shows. Nude bodies are seen walking around, applying makeup in front of mirrors, and getting on their costumes. Nudity in Nude at Heart is presented as natural, not sexual. These nude bodies are people with names and personalities, about whose professional lives the documentary has already provided backgrounds.

Can the film be accused of a male gaze? Nude at Heart is actually a re-edit by editor Mary Stephen of Okutani’s original film, titled Odoriko. According to reports, some similar footage is used, some new scenes and audio are introduced, and a different structure is presented making for a more candid and intimate introspection by Stephen. Okutani’s shots, while innocent by themselves, can easily be mistaken for being exploitative if placed or built up differently in a careless way. Stephen’s pacing and sequencing guides you maturely, laying out elements so as to avoid maliciousness.

Shot with a mini-DV camera, the documentary has a home video feel. The gaze, while still voyeuristic as it lurks at room corners and behind door frames, feels at home. It is leveled equally with the people. Minus in one scene, it’s presence isn’t acknowledged. The picture quality is very fitting for the material: an outdated technology for an art form being phased out. It looks beautiful not because it is crisp, but because it is degraded, giving it more sentimental value.

Nude at Heart ends after the last performance by Rena Itsuki, a veteran in her profession. She shows us her preparation process. She tidies up the makeup room. She wipes the mirror that has taken care of her all this time. “Odoriko don’t do this anymore,” she says, referring to the ritual of wiping the mirror. It probably won’t be used and wiped again. The theater where she has been performing for years shuts its lights permanently, and the darkness of the stage is the final image we see as the credits start to roll.