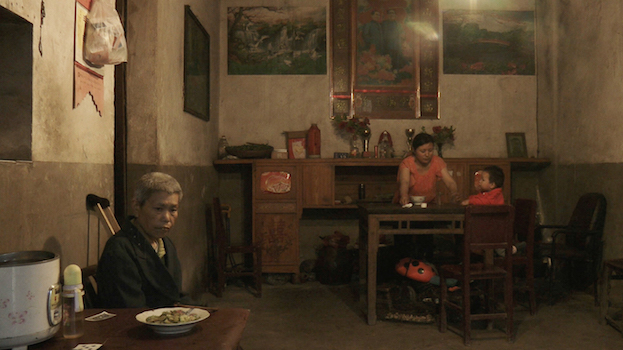 For four days during YIDFF, the members of the Yamagata Film Criticism Workshop discuss films screened at the festival and ways of writing about them critically. The following notes are based on a discussion among workshop participants Becca Voelcker (BV), Quyen Nguyen (QN), Chanon Praepipatmongkol (CP), and Joel Neville Anderson (JNA). The discussion was guided by mentor Chris Fujiwara.

BV: In some senses, Another Year is a chamber piece. Set entirely within two rooms, it observes thirteen dinners shared by a family over fourteen months. But these two small rooms are geographically separate. One is in urban Wuhan, and the other is in the countryside. From one, we hear trains; chickens and dogs wander into the other. Each meal is bookmarked with a title card indicating the month, and the static camera is positioned differently each time. Gradually, as the year and film progress, we come to understand that the father and eldest daughter work in the city. The mother remains in the countryside with two younger children and the grandmother, who has suffered a stroke. The family are “migrant workers,” a term for people in China who have rural household registrations but work in cities.

Through oblique references to the lack of welfare support for such migrants, disclosed in mealtime conversations about income, sickness and childbearing, the precarity of the family’s situation becomes clear. But the rate of disclosure is deliberate. An old neighbour drops in on the family, and sits in the corner of the room, knitting. Having grown up in Wuhan herself, Zhu is akin to this neighbour, knitting a family portrait from behind the camera. Reminiscent of Chantal Akerman’s poised observations of her mother’s kitchen table (No Home Movie) or Russian living rooms (From the East), Zhu watches the three-generation family with close attention. The film’s slow pace allows us to notice things. The father’s hair grows longer in the winter. The daughter, mother and grandmother quarrel. The dumplings are saltier one time, and stuffed too full another.

Zhu’s background in photography and visual art is apparent in Another Year’s meticulously framed compositions, whose depth of field and plays of light recall Vermeer. Equally poised are her cuts, delineated with sound bridges and fades to black. Such formality and control contrast the wandering family conversations, unresolved spats, leftover congee, and repeated concerns (the grandmother is still frail, the father still swigs beer from the bottle). Another year passes.

Framing the arbitrary and ordinary gives them voice. It also foregrounds the film, its maker and audience as listening and looking neighbours. Jean-Luc Nancy calls this kind of relation one of “being-with.” “Being-with” this family, Zhu brings us into a community prefaced less on identification than patient regard. She prompts us to consider the conditions for our experience of this family. What escapes spatial and temporal selection? What can and cannot be understood?

QN: Meals, as this film shows, aren’t merely about the mechanical act of consuming food. Meals are where familial tension unfolds. Members of the family often scream at each other at the table. The mother, in her mild cruelty, calls the grandmother stupid for the latter’s incapacity to reach for water in an efficient manner. The teenage daughter runs away from the table, and from the kitchen, off frame, we hear her tearful shout about not wanting to quit school for work. The father impatiently asks his five-year-old girl to stop messing with the mahjong pieces, his prized source of comfort besides the habit of constantly downing beer. The kids often fight over toys, the TV antenna, plastic cups of Fanta, the endlessly petty and adorable things children are caught up in. These altercations accumulate, month by month, and become heavier with the weight of destitution despite the light nature of so-called family bickering.

But meals are also where filial piety emerges, albeit disguised behind the normalized squabbles of the family. Though treated disturbingly like an unwanted dog, the grandmother is still kept around the house. The teenage daughter doesn’t think too highly of either of her parents, but she helps them out around the house anyway, and perhaps will quit school to get a job. This is a culture that dictates children to take care of or answer to their parents even when the relationship has been divested of affection. Filial piety is complicated in Asian society: a silently aggressive mixture of responsibility, resentment and pity directed towards one’s ancestors.

The redeeming part, not that there has to be one in a documentary or story, is the unwavering presence of care at the table. It is only directed at the youngest boy in the household, perhaps because he is still blameless and the other members of the family derive pleasure from feeding him, playing with him, teasing him, doting on him, showing him their tender side. At some point in the film, the teenage daughter loses it and asks the mother why she decided to bring so many children into this life of eternal irritation and misery. The question of course should have been addressed to both parents, especially the father who, despite his masculine reticence, seems to be the one who makes the calls in the household. But perhaps, now that the children all have to face the human trouble of being born, the more pressing question is how to nourish them. It is not only rice, congee or noodles, which the mother persistently makes on the daily, but another sustenance that makes the young boy in the family such a joyful angel to look at: his mother’s love and kindness, those two clichéd things that might be the healing balm of many woes.

Another Year ends with a New Year’s mini-feast, a happy gathering, where pork, soda and nice clothes appear. Behind the usual wrangling among the children, the moody quietness of the father, the ignored mumbles of the grandmother and the non-stop hustling of the mother, it is hard to see but there might be indeed traces – even stained ones like those signs of grit and wear on the wall – of love, manifest in the attention paid to the young boy or the gentle way the teenage daughter walks her grandmother to bed. It is in these small fleeting moments of compassion that family ties seem bearable and even pleasurable despite their occasional asphyxiations.

CP: Another Year announces itself as a structuralist experiment centered around the unit of the meal. The film observes the same Wuhanese family at the dining table over the course of a year. Intertitles bookending the meals introduce mark the passage of time. Another cut, another month, another dinner conversation. This simple structure, however, belies the suggestion that the meal might be a less discrete unit than initially presumed. We behold a group of six people across three generations, who while gathered in the same space, at the same time attempt to sustain private worlds of their own. Often, the act of eating often happens alongside – and despite – other activities: the little boy is tumbling back and forth on the bed; his sisters gather at the table, fixated on a TV soap opera, while mother passes them meat; father, beer in hand, tunes out from the ruckus; grandmother sits, simply there. In other moments, conversations unfold in a state of inattention: an observation made or a question asked, only to be met with a response much later. What we behold is not the meal as a coherent event per se, but rather moments when we are allowed to observe their being-together as much as their being-apart within the same room. It is in this sense that Another Year raises compelling questions about family life as a spatial drama. To what extent does being a family on the margins of urban Chinese society mean learning to manage the intimate, even claustrophobic, proximity of the studio apartment setting? How does this space structure the possibilities of care as well as alienation? How does the meal, as a moment of daily convergence, actualize a truly shared and communal space?

JNA: Thirteen meals over one year depicted in as many shots over the course of three hours. Relayed in these terms, Zhu Shengze’s Another Year might sound a cold examination of ritual meal preparation and consumption. Upon experience, however, as the intricately composed shots follow one another sandwiched between black leader and bilingual (Chinese/English) title cards announcing the month, the familiarly haphazard conditions of domestic meal consumption offer a wealth of patterns and variations within the film’s rigid stricture. It’s in these patterns that family dramas play out large and small: a stroke and a slow recovery, a story of glasses broken at school that don’t appear replaced for months, graying hair inexplicably rejuvenated.

Between the wandering toddler son, moody elder daughter, quiet middle daughter, ailing grandmother, vigilant mother, and comparatively quiet father, all the members of the family are seldom sitting at the table at the same moment. And in fact often they aren’t always in the same location, forced as they are to divide time between the city of Wuhan offering work, and their rural hometown where the grandmother can rest. Switching between these two locales, the film boasts unique access to their quotidian life to the point where if it were not for the occasional glance to the camera or address to the camerawoman, one might suspect it to be hidden away, often placed near a television drawing intermittent attention from the intermittent diners.

Aside from the final shot, not one composition is repeated, and Another Year’s camera frames each picture as a beautiful and unique cross-section of an exceptionally small domicile. It is in this perfection of each frame, often furnished and arranged (whether by the family or the filmmaker) to properly orient the viewer – such as including a calendar or family photo in view – that the film’s formalism could be perceived as threatening its ethical engagement with its subject. How for instance, does the dirt smudging the walls (beautiful as it is appearing on digital video), serve the film differently from the family in the moment when an elder sibling is stopped from patting dust from the coat of the toddler, who has rubbed his thick coat against the wall, for this dust will blow into the air, and into the food. This question of access and class is, however, partially answered by the other formality of orientation around subject and filmmaker: that of an invitation to dinner extended and accepted, however the mechanics of its extra-cinematic negotiations transpired, as the film’s sustained engagement with the actions around eating makes worthwhile.