The Cases of Ventura and the Pearl Button 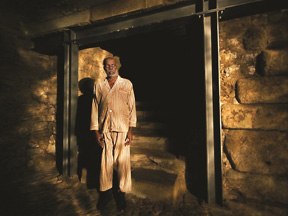 Despite totally opposite approaches, the latest films of Patrizio Guzmán and Pedro Costa are masterpieces in portraying those who have been forgotten.

Patrizio Guzmán’s The Pearl Button and Pedro Costa’s Horse Money were screened back to back at Yamagata International Documentary Film Festival. It was a great opportunity and pleasure not only seeing how stunning and captivating the two films’ visuals are, but looking deeper into how the directors convey a similar message with absolutely different approaches.

Both films are about politically forgotten ones: native peoples who faced genocide from colonization and victims of Pinochet’s regime in Chile, and Cape Verdeans who have to live miserably in a metaphorical prison of Portugal before and after the Carnation Revolution. The conditions of the two filmmakers are extremely distinct: most Chilean filmmakers and the world join Guzmán in criticizing the American-supported military government, while Costa is almost the only active Portuguese filmmaker continuously criticizing the revolution that has been generally named democratic. The approaches of the two films are also quite different. In The Pearl Button, the water of Western Patagonia is cosmically presented both in content and form as something that transcends boundaries, in contrast with the colossal darkness and fear that, in Horse Money, Ventura with his fellow Cape Verdeans cannot escape and in which they exist like ghosts.

“We are all streams from one water,” Guzmán says, quoting Chilean poet Raul Zurita. He uses the phrase to connect the dots of history, from the 3000-year-old quartz with a drop of water inside, to water nomads who made their living in the aquatic labyrinth, to the unique geography which created a geographical sense of Chile as islands with mysteries and also created the conditions for secret concentration camps, to the pearl button – an unexpected legacy of the colonizers which powerfully connects the whole picture and provides the film’s title – that confirms the existence of the vast graves under the sea. The film blends political statements with science by means of La Silla Observatory, the space observation base located in the Atacama Desert which detected faraway planets that may contain water in various forms. Water becomes alive in Guzmán’s realm. It contains the memories and voices of those who died, were forgotten, or are buried. Voices and memories here constantly exist, they evaporate and could become rain anywhere else, including outer space. This is an enormously fresh take in comparison with average political films. Guzmán successfully convinces us with his unique narrative, triggers our emotions with powerful images such as space, comets and the massive destruction of supernova which reached earthly audiences in the same time as the death of Salvador Allende.

While Guzmán’s water represents the perpetuality of time, in Horse Money, Costa’s architecture combines with dark shadows to represent its restrictions. The collective pain of Ventura and the Cape Verdeans is astonishingly presented with bizarre static shots, editing and screenwriting that creates a special realm with its own code of time and space (he is nineteen years old but already retired from labor), all information scattered everywhere. Dimensions are completely twisted in Ventura’s realm; history and memories visually haunt him in the form of ghosts from the past and slowly degrade his physical conditions. The film is constructed upon Costa and Ventura’s memories of April 25th 1974, when the director was a youth yelling revolutionary songs. Thirty years later he found out another parallel story – while he was singing with joy, Ventura and his compatriots were hiding from immigration officials with overwhelming fear. Spirituality here is devastating, memories are disastrous, and voices are destructive enough to turn every living soul into another wandering ghost. Ventura is Costa’s friend in real life, but in Horse Money we cannot confirm his human status, which means that somehow he is a ghost who has been haunted by the other ghosts; we cannot even confirm the status of the exit seen at the end of the film.

The Pearl Button presents a crystal-clear sign of progression and hope that these forgotten voices and memories will be eternally heard through the entire history of planet Earth in times to come. On the contrary, there are strong signs of regression, agony and hopelessness in Horse Money. This prison was built upon forgetting, and Costa’s only suggestion of the way out is: try as hard as you can to forget that we are forgotten. (Chayanin Tiangpitayagorn)