For the Few, Not the Many: Linda Nursanti’s Seeking Justice for Lakardowo 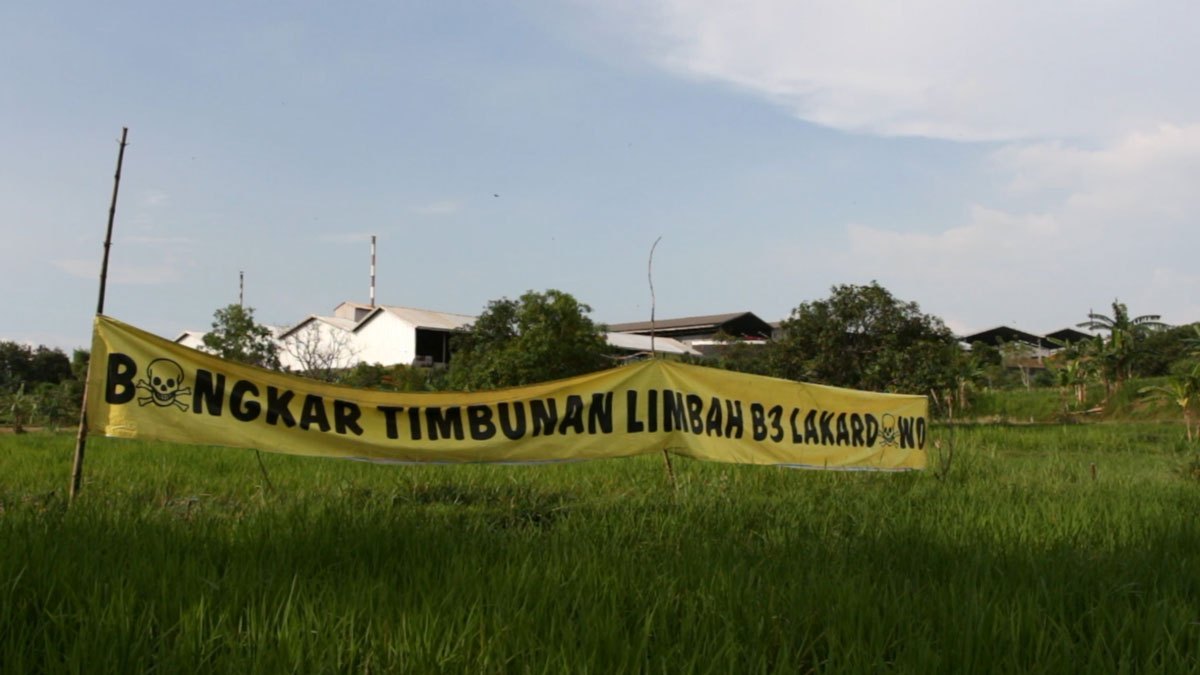 One might live without hope for a week, but one could not live without water for a day. Lakardowo, a small village in East Java, has been surviving without both for years. Seeking Justice for Lakardowo (Lakardowo Mencari Keadilan), a debut feature by Linda Nursanti, documents another episode of the masses being violated by the classes in Indonesia. The message is clear: in the struggle for public welfare, the privileged few has the law on their side.

The film makes no disguise of its political stance. From the very first minute, the screen belongs to the oppressed. Sama’ati, a middle-aged woman, complains about the chemical substance that’s been polluting the water in her village—it’s hot and toxic to the skin. Minutes later we see a man, Suhan, criticize how PT PRIA—the evil big corporation of the story—dump its waste on the village and bury the poison underground. In total, the filmmakers recorded statements from more than fifty people, with half of them coming from the dwellers of Lakardowo. With the film lasting around sixty minutes, that amounts to almost one person per minute.

Among the myriad noises, Sutamah takes the central stage, at least for the early half of the film. Through the roles she serves in the story, we witness the anatomy of collective struggle that unfolds throughout the film. At the beginning, we see her with her family, in her morning routines preparing her daughters who are about to go to school. Then we walk with her around the farming grounds, as she narrates to the camera about the development projects in her village, and the itchy skin that her people has been suffering due to the improper waste disposal of PT PRIA.

Gradually, toward the latter half of the film, Sutamah blends with the masses. We see her among her people—collecting donations, cajoling and consolidating her peers. Then many other characters flood the screen. We see Sutamah’s peers staging demonstrations, presenting data to the government, providing further explanations to the camera about the debacle. As the film progresses, the film is less about Sutamah and more about Lakardowo as a community in distress.

Lakardowo plays like a Kafkaesque nightmare. Throughout the film, we see the villagers stumble from one meeting to another meeting, from one demonstration to another demonstration. For every step forward the villagers made, the bureaucracy forced them to take two steps back. For every data they presented, the government and the corporation doubted them with their own set of data. In the end, there is no distance left to run—a political cul-de-sac.

Sure, Lakardowo could be very overbearing in its message, that one might easily dismiss the film as a typical social-justice-warrior documentary. To be fair, the film does bear many tropes of political documentary in Indonesia. Scenes of children crying, check. Shots of protest banners, check. Protest songs playing over montages of demonstration, check. On-screen texts with fist-pumping messages about social justice, check.

For years, since the regime-toppling events of 1998 Reformation, political advocacy has been the raison d’être of the Indonesian documentary scene. Very little of the nation’s documentaries are personal. The preoccupation is with the social and Lakardowo is no different. What makes Lakardowo worth noting, especially in Indonesia’s current political climate, is its portrayal of the power relations. The filmmaker puts great care to humanize the oppressed villagers, and delve deeper into the structure of power in the region and how it influences the struggle of the masses.

Political documentaries in Indonesia tends to oversimplify social conflicts into two points: the victims and the state. Such narrative usually puts great emphasis on the number of people affected and declares that the state is responsible for them. Consequently, most documentaries about social conflict in Indonesia boil down to the absence of the state, yet fails to investigate how the power structures and their relationships to the people allow such tragedy to occur in the first place. Romanticizing the state, or its absence, is not only misleading but also socially irresponsible.

Lakardowo treads more carefully, more patiently. The filmmakers accompanied the villagers in every ring of bureaucracy they must went through, from local, regional, to national government. In every meeting, the villagers repeated the same data over and over again. It only led to the government suggesting more field investigations, that in turn incited more public protests. In one of the protests, the filmmakers managed to record the villagers negotiating with the police, which in turn threatened the village head. “Do you want your village to be safe or not?” said the authority. Moments later, the crowd dissipated.

Such subtle moments make the message of Lakardowo not only relatable, but also relevant. The state is never one coherent structure of power. Inside it lies a complex ecosystem of power struggles, which presents an endless and repetitive maze for the people who seek justice. By mapping the power relations within the state bureaucracy, Lakardowo makes the rebuttal of the villagers’ protest by the corporation even more powerful. There is one scene in the middle of Lakardowo where the villagers observed PT PRIA factory from their village. They are only separated by several meters of land and a wall. Yet, the villagers must go through several layers of state bureaucracy just to meet the corporation’s representatives and face a political dead-end.

Given the history of human rights violations in Indonesia, one might anticipate the people’s eventual failure, but the film’s narrative had done enough to contextualize the audience with the struggle. The film’s message feels earned, rather than imposed by the filmmakers, which is usually the case with other films of its like.

Lakardowo might never win any award for its artistic merit. Indeed, the most obvious criticism we could address to the film—and most political documentaries in Indonesia—is the awfully basic and rather blurry camerawork it employs. Lakardowo’s greatest strength lies not in beauty, but clarity. In the age of post-truth that we live in, that is more than enough.