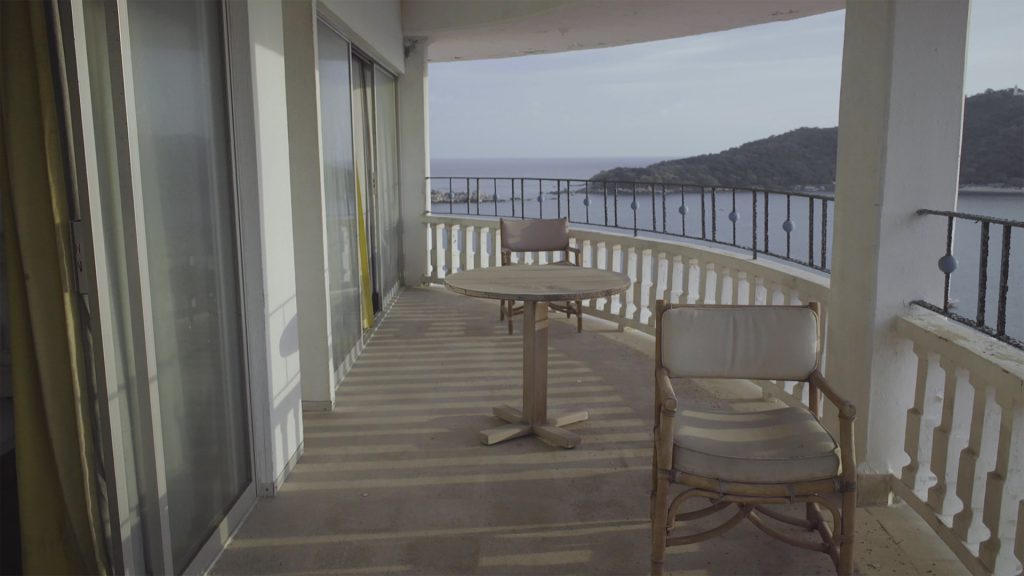 We begin submerged in water. We awaken to the image of silt and then, from the depths of the ocean, we emerge, almost as if rising from baptism, and are introduced to an island. There are little signs of life—a snail crawling on a rock, the sound of birds, and a forest in the distance. Turbulent waters thrash violently in the peripheries of the frame. Against the rock, we see a shadow, extending and flexing. We gaze at images of what appears to be an abandoned resort, the sum of its parts inviting a question: Where are we?

This is how The Still Side begins.

The desolate landscape of the Capaluco—once a resort, a temporary haven, a place of leisure and pleasure—is now left empty. The reasons for its abandonment are visible through the architectural aftermath: cracked walls, broken chairs, dust everywhere, plants and water where there shouldn’t be. Morning announcements cut through the silence to announce the history of these spaces, a glimpse into its lively past and empty future. In each scene, life carves its way through the architecture: moss and vines grow on buildings, tubes funnel symphonies instead of water, curtains dance to the wind, and algae and fish create homes out of underwater pillars.

We experience these through the perspective of the Siyokoy, whose face is unknown but whose presence is asserted through its shadow. Often spoken of as a vile, man-eating sea creature, it is carried onto this island by a current that connects Manila and Mexico—an umbilical cord between countries with a shared history. Echoes of life are painted through the soundscape and one wonders if the Siyokoy understands the purpose these spaces once had. We explore parts of the island along with it as it leaves the ocean for land, abandoning its history and myth of violence. In a place that holds no competition or interference, its discomfort is transformed into peace; it becomes a pioneer species.

In the process of watching The Still Side, I cannot help but think of ecological succession: how biological communities change over time after a major disturbance. From the trees that fall in the middle of the forest to asteroids that wiped out the dinosaurs, these disturbances shake up the status quo within a community to be of service to life in the long run; a form of self-destruction for the common good; an annihilation that allows life to adapt and prevail.

The human condition is threatened by similar disturbances: collapse of the neoliberal economy, labor strikes, changes in the media, a global pandemic. Though these threats remind us that life is fickle, it is possible to live even in the presence of destruction and destitution. Revereza and Fusilier contemplate the sustainability of these architectural marvels in the face of time, nature, and evolution, but also express hope in the persistence of these structures, even if their revival in the hands of the human race remains unsure.

In a way, the documentary captures this struggle to preserve life in a way that keeps its being, unlike in the colorful murals of animals, timeless but lifeless suspensions. By blurring the line between the artificial and the natural, The Still Side reveals how myth and reality can co-exist within the same space to tell larger and more complex truths about the politics and purpose of creation, preservation, and destruction of art and architecture. In the same way that each frame must be replaced by another for the film to move forward, we find our lives in the midst of an ecological succession—in order to keep on living, we must allow the current to carry us wherever we need to go; in medias res only until the next disturbance; an acknowledgement that life does not only occur in one place and that home can be many places.

Revereza’s experiences as an undocumented immigrant in the U.S. influence not only the subject matter of his films but the way his films are created. In his previous work such as Distancing (2019), No Data Plan (2019), and Disintegration 93-96 (2017), images are fleeting and ambient sound  is overlaid with artificial ones. Motion is imperative and attachment often serves as baggage due the persistent threat of displacement, even if the assailant is absent from the frame. In each of his films, migration always means separation: from family, from the state, from earthly belongings, from his concepts of himself. Free from these tethers, Revereza was free to improvise and discover but also turned himself into a perpetual outsider; an anonymous and liminal figure whose life is reflected in his films only in fragments.

But in The Still Side, the usual shakiness in his camera, the body that is associated with this movement, is no longer running away from anything. In a way, Fusilier’s presence as a co-director allows Revereza to anchor himself in this fictional Mexico and this is reflected in the camera movements: how it lingers or slowly pans across the vast space. In this land where there is neither enemy nor friend, there is room to breathe and a chance to take time. Revereza and Fusilier are pioneers here and repurpose a space historically failed by the neoliberal, capitalist, and colonial society into a home where those unjustly treated by these systems can return to; a place where men can no longer treat each other like monsters.