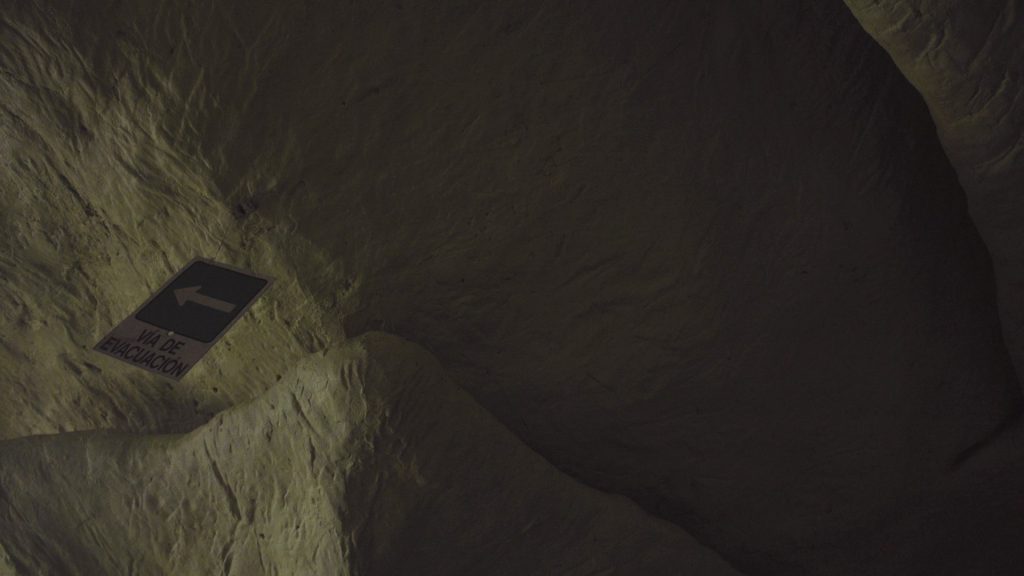 From its very beginning, Miko Revereza and Carolina Fusilier’s The Still Side announces itself as a film obsessed with the minutest details of neoliberalism’s consequences. Consisting predominantly of perfectly framed closeup shots of the deserted parks and crumbling buildings of the abandoned semi-imaginary all-inclusive resort island Capaluco (Acapulco with each consonant moved one space to the left), the film gives us almost no context about what happens onscreen. Not that we need any.

Each of us, irrespective of where we are from, has seen such a place, if unlucky enough, has probably even been to one. Because such places are the result of nothing else but neoliberalism and its best friend, consumerism. Statues and columns next to “exotic”-looking monuments and ornaments and cafes in cheap movie set-like caves. Each of them simulacrum of an original uprooted and displaced by colonialism, reproduced ad infinitum only to become a background of a gaudy all-inclusive dream resort. What we see might be the imaginary Capaluco, but it might as well be in any place on Earth punished with an all-inclusive resort. Or is it Skopje beamed back to us from the future? It’s all of them and none, everywhere and nowhere, seem to say Revereza and Fusilier. Globalization writ large.

The spaces we see are crumbling and devoid of people, but not completely dead. No, that would be too humane for them because then they could be rebuilt and used for something else. Instead, they are all left in a state of limbo. Ghost spaces tethered to this world with the chain of bureaucracy. We are reminded of that time and again. A drainpipe that sucks all the water just to spit it back again. Dismantled sewage pipes that emit ghostly drones, as if trying to tell us something. Each gurgle of water and wail of the wind a bit quieter than the rest. Always dying, never fully dead.

Though dilapidated and bereft of human presence, the artificial caves, gaudy statues, and papier-mache monuments that fill this imaginary-yet-real island are teeming with microscopic life. We don’t see it for the most part, but we hear it. A lot of it. High pitched screeches on top of effervescent drones and micro crackles composed so well that they bring to mind the music of Toshimaru Nakamura and Richard Chartier. It is as if microscopic squatters are occupying these abandoned places, slowly changing them, making them fully theirs.

The beauty of the artificiality of the spaces and highly abstract (and utterly enjoyable for all fans of electroacoustic improvisations and microsound) sound design is offset by the pseudo-philosophical (and at times preachy) dialogue between the filmmakers. Delivered with the type of casual tone that is supposed to convey that what is told is profound, it is anything but that. Rather, the content of the filmmakers’ dialogue reminds me of the freshmen I teach in university—feeling like they know everything, though knowing almost nothing, they utter obvious statements using big-sounding terms.

This is best exemplified by a story about a Siyokoy, a mythological merman from the Philippines, told by Revereza early on in the film. Its length implies that it is important for the film. How, though, we are only left to wonder. There seem to be no direct links to it in what is shown on screen. Neither is it mentioned at any other time during the voiceover. Even its connection with the themes of the documentary is tenuous at best. Is it chosen because it represents the ways neoliberalism and consumerism destroy nature and displace life? Or the ways they regurgitate culturally important symbols to the point of them becoming nothing? Or maybe even we, the viewers, are this mythical merman, as the opening shot suggests. Well, we don’t know. And the sad fact is that it doesn’t seem like the filmmakers do either.

Though visually and aurally engaging, The Still Life is rendered almost impossible to take seriously by a narration that seems to say nothing valuable about the topics the movie seems to engage with. We can just hope that one day its soundtrack will get a separate release. Hopefully by a good label. Preferably on a vinyl.