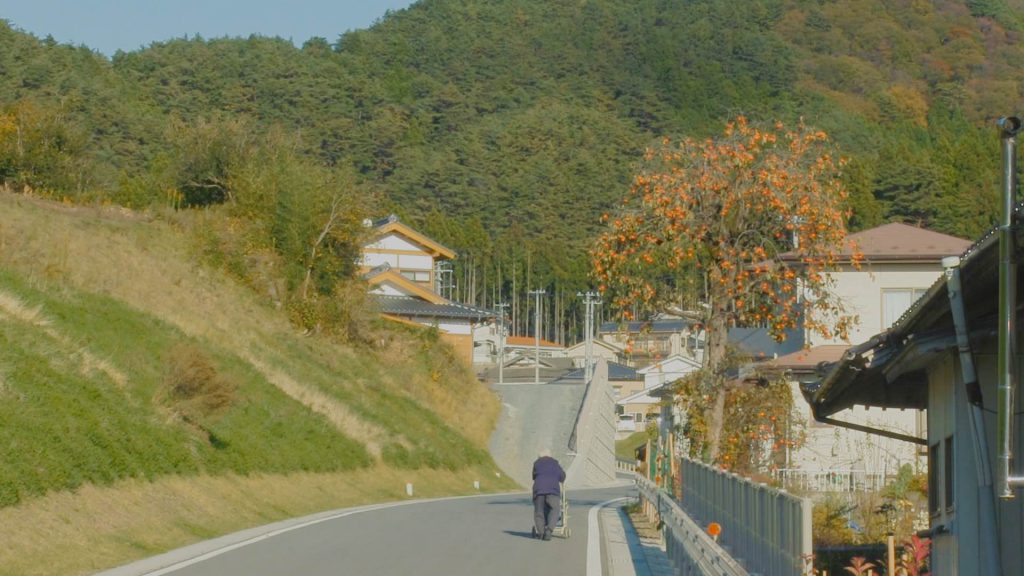 I have always had a soft spot for Grandmas. I guess it is because of my own Grandma. I didn’t anticipate meeting her in Songs Still Sung: Voices from the Tsunami Shores. But I did. Let me tell you why.

Songs Still Sung begins with a poem recited by one of the Grandmas of the film. We then learn that this poem was translated from standard Japanese into Kensengo, the Kensen region’s dialect of Japanese. This translation emerged from a series of translation workshops called Poems of Ishikawa Takuboku in the Voices of Tohoku Grandmas, which were led by poet Arai Takako in Ofunato, Iwate Prefecture. The Ofunato shores have witnessed and endured three tsunamis over the course of a century, in 1933, 1960, and 2011, and the Grandmas in the workshop have lived through at least one or the total of the three of them. In this workshop, the Grandmas were invited to choose to their likings the poems of Ishikawa Takuhoku (a 20th-century Japanese poet also born in Iwate, that was renowned for his poems written in standard Japanese) and translate them into Kensengo, the dialect that they were born and grew up with.

Why do I find this a stunning approach to a film about survivors of tsunami? All too often, documentary films made about people surviving a catastrophe or trauma paint a horrendous portrait of the physical and psychological scars left upon such survivors; they can easily fall into the stereotypes of either dramatizing the pain and suffering, or overglorifying the resilience of those who remain. Grandmas. Poetry. Translation. To me, the combination works just right, in a form of poetry readings, observation, and interviews that is simple, straightforward, and unadorned. Perhaps because of that, Songs Still Sung is rendered into a powerful ode against forgetting.

After a few minutes into the film, it slowly dawns on me what the translation workshop is actually about. In Japan as much as everywhere else in the world, globalization and fast-paced modernization have brought about the inevitable assimilation of cultures, in which a variety of cultures or languages that are deemed “minor” are easily subjected to reduction and swallowed up by the “major” ones in a brutal process called standardization. The Kensen dialect is currently on the verge of disappearing. The grandchildren of these Grandmas go to schools where they are taught standard Japanese, and gradually, often out of shame and fear for not being understood, they learn to forget their own dialect in order to fit in. Through a small gesture, the act of translating from standard Japanese to Kensengo and not the other way around as they’ve often been told to do, Ofunato Grandmas were given a tool to reclaim the ownership of their language, to appreciate the beauty in a diverse range of connotations that standard Japanese cannot afford, and to resist, gently, the collective forgetting of their own origin.

The second time I watched the film, I just listened to the recitals by the Grandmas without reading the subtitles. In a language I don’t understand, the poems are like songs to my ears. I cannot differentiate between Kensen dialect and standard Japanese, but there is this vibration humming at the end of each line, beautifully delivered in the soft voices of the Grandmas, that makes me tremble. Participants in this translation workshop were the Grandmas of Ofunato, not the intellectuals, not the students in the region. Why is it so? More often than not, the seniors, our Grandmas and Grandpas, are those who are left behind by our society, with the speed of the time they cannot catch up with, the urge to move forward they cannot follow, the refusal of memories. It seems like our desire for development has succeeded in forgetting the slow pace of life, old methods of communication, and intergenerational values that are nothing to us, but everything they used to know. Sometimes I even wonder whether we young generations, through our hi-tech, transactional, outward-looking lifestyles, are made accomplices in the process of marginalizing our seniors on the basis of everyday life.

In the film, poet Arai Takako doesn’t tell us why she hasn’t worked with the Grandpas in the region. But as a woman herself, she must know too well that it is the women, especially those who belong to the generation of Ofunato Grandmas, that are subjected to social exclusion on even more structural levels. Many of them share in the interviews in the film how they were denied of education, thus denied of tools to keep their memories alive. Still, Grandmas persist. They sing, they make poems, and they hold onto memories so rich with aural and oral qualities that transcend time and space.

Songs Still Sung defies any expectation of past traumas being depicted on the screen. No cliché. No crying. No complaints. No aggression. When asked what the ocean—one that hit the region not just once but three times—means to them, one Grandma responds with ease, “I still have to eat their fish.” Looking at the close-up shots detailing the aging of their skin, the absence of their teeth, the whiteness of their hair, the presence of wrinkles, freckles, age spots, injuries, and burns, I cannot help but think how time has sculpted upon their bodies. How many wars, deaths, and upheavals have they been witnesses to? How many personal losses have they endured? Somehow history is literarily etched upon my own Grandma’s memory, making it so rich with details and overflowing with rare vividness and specificity. What I especially like about her is that she doesn’t bother following chronological order and is not at all concerned with telling apart minor from major events, let alone editing out bad from good memories. As a collective, our society often opts to forget, in order to move on. These Grandmas, as much as my own Grandma, remind me how remembering, perhaps with the aid of poetry and oral transmission of stories, can help us reconcile with the past and live more peacefully in the present.