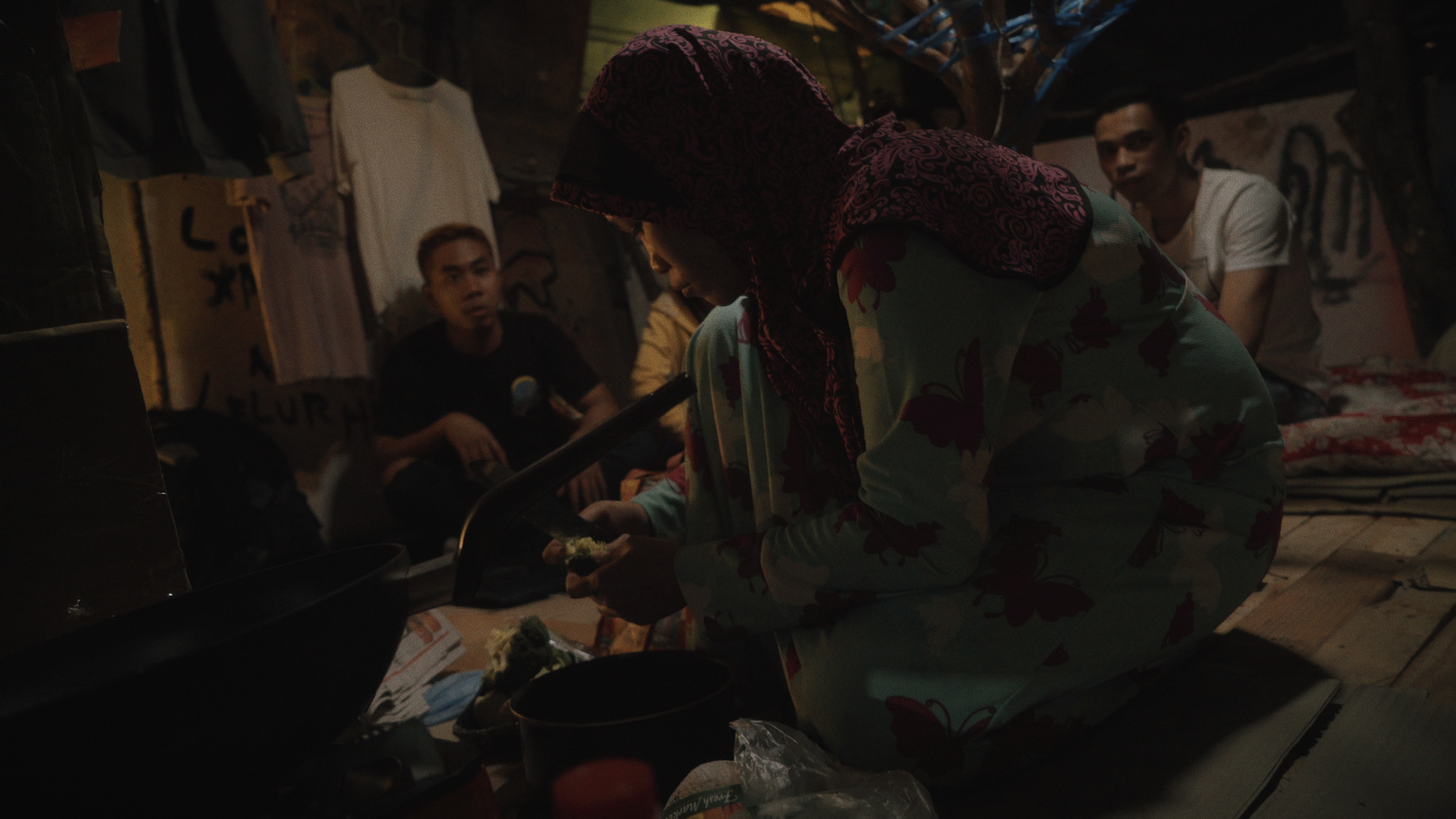 If air takes the shape of its container, then Hut is a film best described as vaporous. It seems to originate from an innocent question: “How many people can one fit within a camera?” First devised in a workshop, the film is a document of a spatial experiment, and its matter is not so much introduced (as it would be in a more conventional film) as it is controlled. The space is a cozy hut somewhere in Taiwan. At the beginning of the film, three Indonesian workers enter. They are shortly joined by a growing stream of participants, who all describe themselves as “runaways” from their harsh working conditions.

Hut’s setup reminds one of a chamber piece. But there is certainly no drama here, only a blank canvas filled in by the participants. Stories of exploitation initially form the denominator of their conversation: in search of work and promised high pay, most are now in debt because of the exorbitant interest imposed by their middlemen. Irregular work hours are a further source of insecurity. Yet, Hut cannot be reduced to these anxieties. The roar of passing trains frequently resets the dials of their conversation, prompting them to find more imaginative forms of expression.

A transformation is taking place: they devise new ways to pass time, not with words but with action. Their reenactments take on concrete forms and leave tangible marks on the space. Some of their gestures are as simple as rearranging the furniture. Others are harder to grasp, like the smell of a homemade chicken dish one occupant prepares. The air is pregnant and expanding. What they assert is their occupancy of the unclaimed space of the hut: they are now residents, without the foreign skins they’re saddled with elsewhere.

In the middle of a skit, one participant declares: “This is the story of my friend. We come to act it out, because it’s all so interesting.” The participants resemble authors, claiming a power that would conventionally belong to the camera. At the same time, the bodily form of the camera becomes more apparent. Sweeping pans give way to sudden, paranoid cuts and swivel-arounds, as if the camera were a head reacting to its name being called. Topics shortcut from one to another, while asides splinter away from larger conversations, swelling the experimental space. These fissions threaten to tear apart the hut’s thin walls and overwhelm the logic of observation that structured the film initially.

Above all, the chamber remains, and since the participants remain irreducible to mere characters, the film’s true promise lies in its space and the tension of occupying it. Articulating the distresses that the participants bring to the workshop is not a matter of language or conversation. In the riotous space, speech becomes indiscernable, while fragmented utterances can no longer be associated with either speaker or context.

Instead, a sensation of sprawling, entropic and gaseous matter dominates the film, pointing back to the hut, the container giving shape to that matter. Hut affirms the importance of architecture in articulating its participants’ anxieties, finding a space to house them in before all else.

A note on the screening:

Life briefly imitated art on a Saturday afternoon when a full house gathered in the Forum to watch Hut. Outside, Typhoon Hagibis was unleashing a ceaselessly dull downpour over Yamagata and stopped train services, stranding everyone in this movie capital. I couldn’t help but feel a strange intimacy amid these stranger circumstances. Some of us could very well have come simply to escape the ceaseless rain outside, enjoying the intense romance of strangers taking refuge in a movie theater. Halfway through the post-screening dialogue, the air also exploded when everyone’s phones rang with yet another typhoon warning alert. And watching So’s intensely architectural film, perhaps we, after all, were the “runaway” participants, reorienting ourselves within our own temporary chamber.